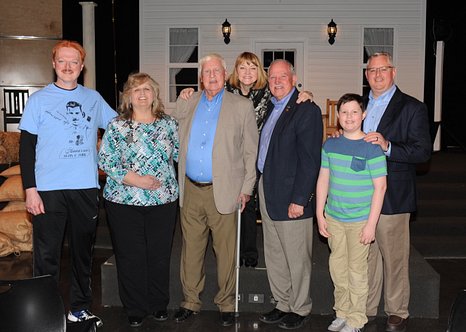 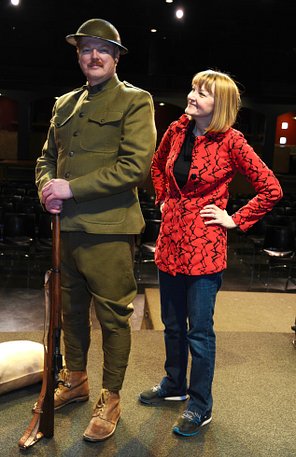 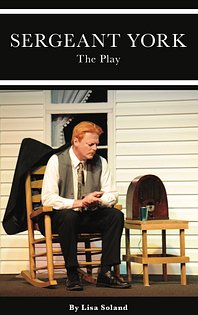 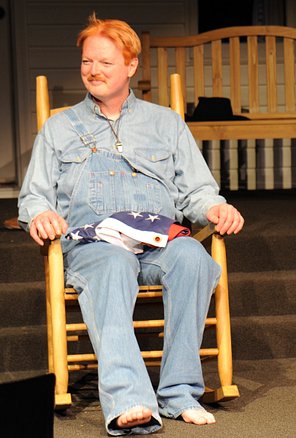 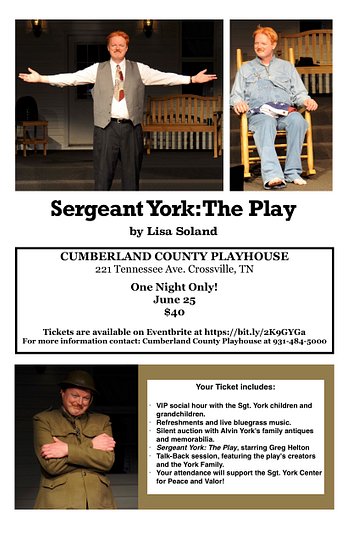 The next performance of SERGEANT YORK: THE PLAY will be at the Cumberland Country Playhouse on June 25 at 6 pm. This production is a fundraiser for the Sgt. York Patriotic Foundation and their project of turning the Alvin York Institute into a Center for Peace and Valour. Hope you can join us on June 25th!

Get your tickets now at https://bit.ly/2K9GYGa

And the book contains photos, a list of all performances and cast and crew information. Get your copies in time for Christmas by emailing sergeantyorkplay@gmail.com. Provide us with the number of plays, who to sign them to, and where to mail them. Cost is $12 plus S&H.

We will send you a total from paypal.

WHAT THEY'RE SAYING ABOUT SERGEANT YORK: THE PLAY...

"Sergeant York: The Play is wonderful. Playwright Lisa Soland has really captured the heart and soul of what my great grandfather, Alvin York, was all about. She’s done extensive research, not only on Sgt. York, but interviews with the family, spending a lot of time in Pall Mall, getting to know the culture and the family and the story about the man behind the medals. This play captures Sgt. York's loyalty to God and country, and his service to the community. It's simply a wonderful play."

and great-granddaughter of Alvin York

"If you have the opportunity, you really should check out Sergeant York: The Play.It's incredibly historically accurate, and true to the essence of Sgt. York's story. Seeing this play is a great opportunity to learn more about a true American hero."

“Lisa Soland's wonderful new play tells the story of WWI war hero Alvin York. The play is full of folksy humor and wisdom as Sgt. York recounts his life from his boyhood on a poor Tennessee farm to his hard-drinking days and eventually the rediscovery of his faith. It was this faith that caused him much anguish when called to war, but he became America's greatest war hero though he never saw himself as such. Sergeant York: The Play is always entertaining, but is also a powerful statement on the nature of war and the power of faith.”

"Sergeant York: The Play is real good. A lot of that stuff the character of Alvin said in the play, I heard Daddy say all the time.”

Photo taken on world premiere of SERGEANT YORK: THE PLAY, April 20, 2018, to a very appreciative audience. Members of Alvin York's descendants were in attendance!

SERGEANT YORK: THE PLAY has been running since April 20, 2018. To catch one of its traveling performances, check out schedule below...